Election observer Maud on her mission in Bosnia and Herzegovina 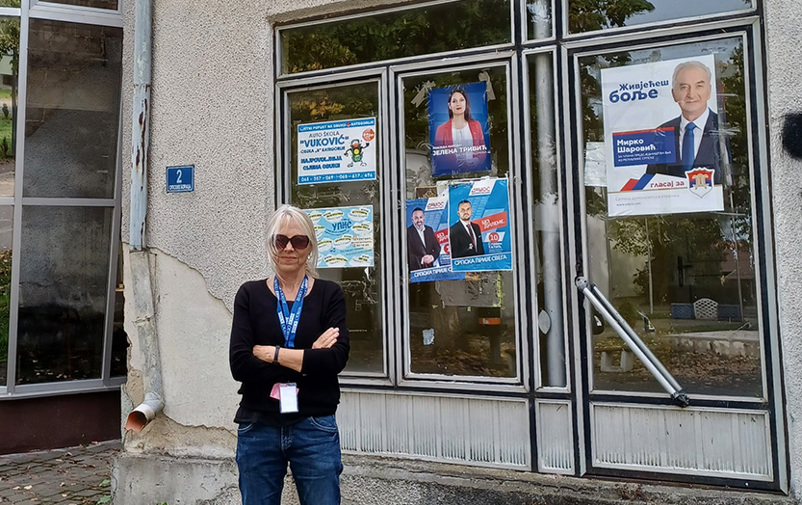 Dela
Maud Johansson is a freelancer with a long background in development, peace and aid work. From September to October 2022, she served as a long-term observer with the ODIHR election observation mission for Bosnia and Herzegovina's general elections. Maud was stationed in the city of Banja Luka.

What does the role of a long-term observer entail?

– The job of long-term observers is to gather information about everything that happens in an election process before the election day itself: candidates are nominated, electoral rolls are prepared, campaigns are conducted, local election officials are appointed and so forth. We do this mainly by interviewing a wide range of people who in some way have a role in the election. As voting is only a small part of the whole electoral process, these components need to be taken into account when making an overall assessment of how well an election complies with international conventions and regulations.”

– A typical day might start with observing a meeting of a district-level election commission to see how far they have come in their preparations and that their work is transparent and democratic. Then we also meet with local party representatives to assess, for example, the extent to which they can campaign freely and that women representatives can campaign on the same terms as men.

– Finally, we might then meet with a representative from the media to learn if they can act without pressure and threats, and that they have access to information from those in power.

– In Bosnia and Herzegovina, I worked in rural areas, so there were long car rides every day. The travel time was used to book appointments on the phone, make phone calls and follow up on various issues and browse candidates' Facebook pages. Or just look out the window and see the clear rivers and green forests that characterise the area. But we also saw whole villages of houses that were boarded up and shuttered. 'They have migrated to Germany,’ our assistant explained.”

Is there anything you watch for in particular?

– One thing we're always very observant of is whether people are being threatened or pressured. It may be candidates, journalists, activists or ordinary voters. As best we can, we always try to follow up if we hear of such cases, or indeed other alleged irregularities. Any conclusion we draw must be based on verified facts. Of course, our own observations are best, but when that is not possible, we always try to find several independent sources. Sometimes it is quite possible to piece together facts from credible sources about a situation, other times it is difficult!

Are there any risks associated with the mission?

– I have never experienced any really threatening or unpleasant situations. Of course, there may be dangers. The first time I was in Bosnia and Herzegovina, the 1996 elections, the country was littered with landmines! But we are quite well trained both in working in mined areas and in dealing with other dangerous situations that may arise. A lot of it is about common sense and avoiding risky situations. In general, we are very well received by most people we talk to.

You have experience from many election observation missions in several different countries. How did you experience this year's election campaign in Bosnia and Herzegovina?

– Bosnia and Herzegovina is a wonderful country with wonderful people, but the political system is still based on the Dayton Agreement and its structures, which are largely ethnically based. Also, many of the parties are based on ethnicity and in the part of the country I worked in, Republika Srpska, a strong nationalist agenda has virtually overshadowed the mainstream issues of the major parties.

FBA is commissioned by the Swedish government to second Swedish personnel to international election observation missions led by the EU, OSCE, OAS and The Carter Center. Election observation contributes to democratic development and can help preventing electoral violence.