Photo of UN soldiers in Congo. Letter from the Dag Hammarskjöld archive.

Dela
The Peace Archives is a digital archive of Sweden’s contributions to international peace operations. Established in 2006, it was initially a project to make digital copies of government documents about peacekeeping operations. 15 years later, the collections also include personal archives from individuals who have participated in peace missions. Several efforts have been made to make the material more easily accessible, such as an ongoing project to create a web platform with an improved search function.

The oldest document in the Peace Archives is a diary from 1850. It is written in verse by the Swedish lieutenant Otto Johan Ringheim during the peacekeeping operation after the war in Schleswig-Holstein between Denmark and the German Confederation. Along with 2 million other documents, reports, letters, and photographs, it creates a collected memory of Sweden’s participation in international peacekeeping operation until the present day.

–Sometimes we define the collection by saying that it is everything you can put in a scanner. No medals or uniforms, but documents such as reports, photographs, letters, and notes, says curator Mattias Wandler.

The Peace Archives’ main objective is to facilitate research, theory development, methodology development and general knowledge about peacekeeping operations. For example, their documents have been used to research collaboration within joint military operations between Sweden and Finland and the media image of Sweden’s participation in the UN mission in Congo in the 1960’s. 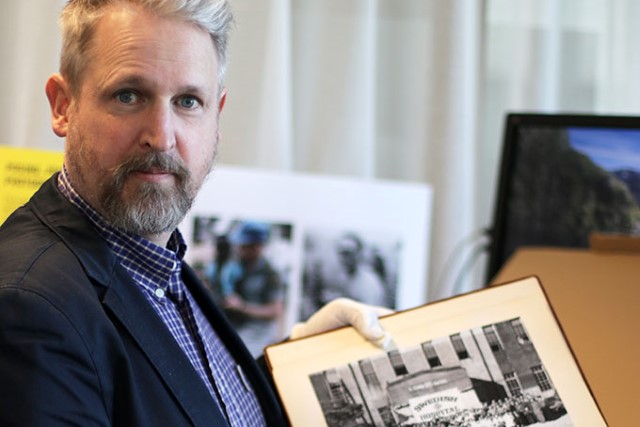 People who want to access the collections are currently required to visit a library or any other institution that is connected to the Peace Archives.
However, an ongoing project will make it easier to access and search in the Peace Archives from wherever there is an internet connection. The project will result in a new web page and data base that are to be launched in 2022.

–The web page will provide the visitor with a more pleasant visual experience when searching in the archives. But the main thing is that it will be possible to free text search, which has not been possible before. We have provided the documents with more complex metadata which enables the visitor to use more advanced search queries and get more relevant results, says Mattias Wandler.

The launch of the web platform is the latest of several developments undertaken by the Peace Archives since 2006. Apart from becoming more digital, the archives have also been expanded with private material from individuals who have participated in peace missions.

This is valuable for both research and follow-up, since it reflects individual experience and complements official documents.

–It is especially interesting when there are individuals who have participated in several peace missions, since there is a tendency to compare with earlier experiences when describing the current mission. This enables us to follow the peace missions’ development over time, says Mattias Wandler.

Even though the new web platform has not yet been launched, Mattias Wandler already has some ideas for future projects. For instance, he mentions releasing photographs under a creative commons license, which he hopes would appeal to new target audiences.

–Perhaps that is not entirely within our mission, but we want to support research over time. In order to do so, we want to reach more university students. We want to make it easy for them to use our material when writing essays and doing research. Hopefully, that could deepen their interest for peacekeeping operations so that 20 years later, they might return to us as researchers.

The Peace Archives at fba.se