Dela
This year Sweden leads the work of the OSCE faced by a challenging security situation. Several conflicts are in progress in the region: Ukraine, Nagorno-Karabakh and the political crisis in Belarus. Sweden protects the European security order and emphasizes that democracy and human rights are the basis for security. FBA offers support to the OSCE and the Swedish chair in order to contribute to solutions to the protracted conflicts in the region.

The organization for security and co-operation in Europe, OSCE, is the world’s largest regional security organization with 57 participating states from Europe, Central Asia and North America. It originates from the cold war when the countries in Europe, Russia and the USA agreed to increase security and maintain peace. The task is to defend the European security order by conflict prevention and management.

All participating states have committed to adhere to common principles, stipulating that states are entitled to territorial integrity, to make their own independent choices regarding foreign policy and to not use violence against other states, as well as in areas like democracy and human rights.

– In recent years, we have seen examples of how these principles are being challenged and Sweden wants to put these core values at the center of the organization’s operations, explains Fredrik Nordin, Counsellor at the Permanent Delegation of Sweden to the OSCE and is responsible for regional and thematic issues.

Swedish foreign minister Ann Linde’s first trips as OSCE Chairperson-in-office went to the conflict-affected countries in the region and Moscow since Russia has a crucial role. This shows that the conflicts are a priority to Sweden. According to the comprehensive approach to security of the OSCE, states that respect democracy and human rights experience better security within their own borders and are at lower risk to get into conflict with other countries. To monitor and promote the participating states’ respect for human rights is therefore an important part of OSCE’s operations.

Decision making in the OSCE requires unanimous agreement, which can be a challenge. The countries have different views on democracy and human rights, and some of them are involved in bilateral conflicts, like Russia and Ukraine.

According to Fredrik Nordin, the OSCE is an important platform for dialogue.

– It is valuable that countries with different opinions and views meet every week to discuss, even if there is deep disagreement, he says and continues:

– Despite the challenges, Sweden tries to inform the OSCE agenda by reminding about the fundamental principles that guide our efforts when trying to solve these conflicts.

Sweden’s priorities as a Chair corresponds well to FBA’s areas of expertise. During this year, FBA carries out a number of activities to enhance OSCE’s work with conflict prevention. For instance, FBA will gather the organization’s special envoys to discuss common challenges. In addition, FBA supports the work to develop guidelines for disarmament, demobilization and reintegration of former combatants.

– We also contribute to the current updating of the guidelines on security sector reform and we’re developing a training for the OSCE staff which can be used at the secretariat and in various field missions,, says Emma Skeppström, head of the Security Sector Reform Unit at FBA.

The new guidelines aim to create  a more unified view on security sector reform and harmonize  the practical work with the issues. Democratic institutions such as the government and parliament should control and oversee the security sector to ensure  that actors like the police, the military and the border control act correctly.

– Our experts can support OSCE’s work to strengthen the link between rule of law, human rights and democracy, Emma Skeppström says.

As the OSCE leads many peace and election observation missions, it makes the organization an important partner to FBA which seconds civilian Swedish personnel to these and other international peace missions.

Johan Chytraeus is seconded from FBA to the OSCE Special Monitoring Mission to Ukraine, SMM, since 2017. The mission was initiated at the request of the Ukrainian government in spring 2014, following violent demonstrations in several places, a blazing conflict in the eastern part of the country and Russia’s annexation of the Crimean peninsula.

– We are supposed to be the world’s objective eyes and ears in the country and report about what happens in Ukraine on a daily basis with a focus on the security situation and humanitarian situation. We also enable dialogue between the conflicting parties, says Johan Chytraeus, deputy manager for SMM mission office in the Kherson region, next to the Crimean peninsula.

The conflict in Ukraine is manifested in different ways depending on where you are. Although the economy has been severely affected, the ongoing conflict is not very visible in daily life in Kherson.

In Donbas, where Johan Chytraeus war deployed previously, hostilities between Ukrainian forces and pro-Russian separatists are frequent and the area is full of landmines, which makes it difficult for the population.

Every day OSCE publishes a report covering the past 24 hours. It contains military observations, incidents with civilian casualties and meetings with political representatives of the society.

– Our work is about planning and carrying out patrols and analyze the information we receive in the course of the day, Johan Chytraeus says.

According to Sweden’s Minister for Foreign Affairs Ann Linde, the OSCE should have access to Ukraine’s entire territory. At the moment patrols have to stop at the three border crossings towards the Crimean peninsula.

Despite this, Johan Chytraeus says that the mission has a pretty good understanding of the situation, thanks to information from internally displaced people, monitoring the environment and media reports. 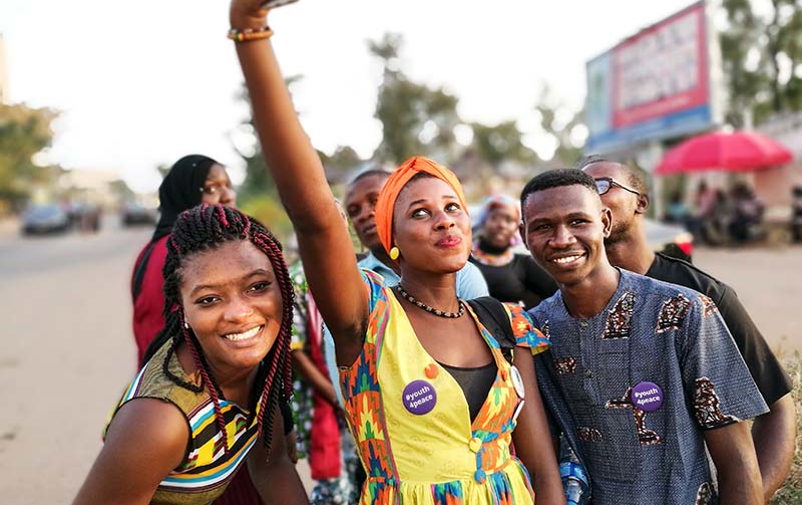 New online tool on the Youth, Peace and Security agenda

In 2021, six years have passed since the adoption of UN Security Council Resolution 2250 on Youth, Peace and Security. Two additional resolutions have since been adopted on the same theme and together they represent the agenda for Youth, Peace and Security. In the past year, the FBA, in collaboration with the United Nations System Staff College (UNSSC) launched the “Realizing the Youth Peace and Security Agenda” online course to provide peace practitioners with the skills and knowledge they need to implement the agenda in practice. In December, on the sixth anniversary of the adoption of resolution 2250, FBA and UNSSC jointly launched an open online version of the course.