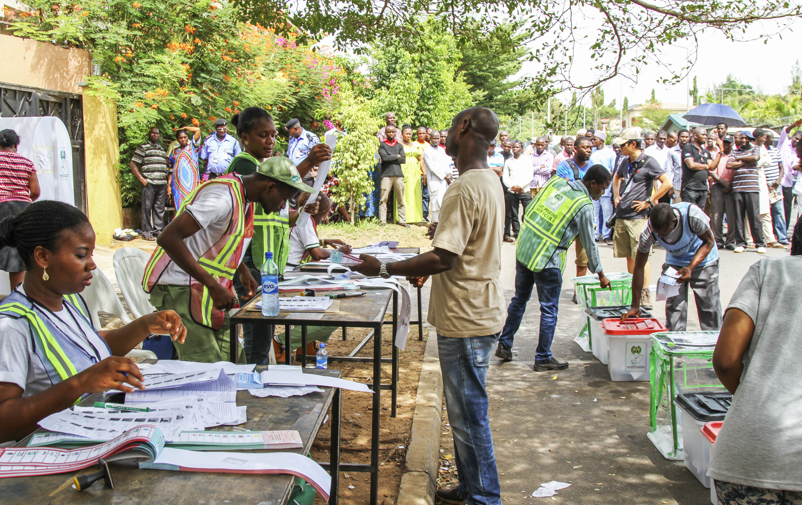 Dela
Up to 84 million Nigerians are now going to the polls. But the risk of violence in connection with the presidential and parliamentary election casts a long shadow over Africa’s most populated nation. Hundreds of lives have been lost during earlier elections. Electoral violence is also a threat to peace in many other countries. FBA conducts research and training on prevention of electoral violence, and deploys election observers whose presence can contribute to law and order.

The Kenya crisis in 2007–2008. The Thailand clashes in 2010. The attacks in Afghanistan last year. Those are just some examples of electoral violence generating massive headlines during the last decade.

Violence occurs in connection with over half of the world’s elections, and it has also become more frequent in recent years.

– According to research, democratic elections have gained in importance globally. There is growing international pressure upon each country to hold regular elections with several candidates, and to respect the results. This is overall a positive change. But when there are more elections being held, with more competition between different candidates, the risk increases of violence in connection with elections, Mimmi Söderberg Kovacs says.

She is head of research at FBA and released the book “Violence in African Elections” in 2018 together with Jesper Bjarnesen from the Nordic Africa Institute. The book maps out the drivers of electoral violence and how to prevent it, with a focus on Africa.

– But the risk factors associated with electoral violence are largely the same in all countries, outside of Africa as well. Nations without a long history of democracy are the most vulnerable. The risk of violence also increases during close election races with uncertain results, Mimmi says.

According to her, one of the most important measures to prevent electoral violence in the long-term is to reform the political and electoral system in the most vulnerable countries.

– Many young democracies practice majority rule. There is only one winner in each election. In many of those states, there is also a strong concentration of political and economic power. If you win the election, you have all the resources at your disposal. It becomes a “do or die affair”. The introduction of a system of proportional representation and a decentralization of power, in order to prevent resource concentration, can lower the risk of electoral violence.

Mimmi mentions Liberia as an example. A new government was installed over a year ago, but the government agencies have not yet been staffed with all the new personnel needed. The government is expected to employ thousands of civil servants deemed loyal to the new regime. In many African states, a new president is even expected to personally name new principals of all the national universities.

– With such a system everything is at stake in the elections. If you lose, you miss out on all opportunities to have an influence, you may even be at risk of persecution by the power. Moreover, many of those countries have high rates of poverty and unemployment. This makes it easy for political leaders to recruit followers prepared to commit violence in connection with the elections. Politicians may promise favours if they win. Giving away free beer might even be enough to mobilize perpetrators of violence, Mimmi says.

– But those cases are really extreme, such as Kenya in 2007. The most common form of electoral violence is rather low-intensity and it may occur before and during an election, as well as after. It does not necessarily have to cause fatalities either. Electoral violence also comprises harassment and threats from the followers of one political candidate, directed at the rival’s followers, or campaign rally sabotage.

Threat of violence a threat to women’s participation

In addition to that, electoral violence does not only occur between followers of different parties, according to Mimmi.
– Violence often occurs between different factions within the same party. The international community could help preventing this, by training politicians in vulnerable countries so that they handle internal power struggles within their parties by dialogue and mediation, without resorting to violence.

Electoral violence is not only a threat to peace and security, and to democracy. It can also be seen as a threat to gender equality.

– Electoral violence is a relatively new field of research. During the workshops that we arrange, selected researchers have the opportunity to discuss existing knowledge and propose further studies to be done, and to spread knowledge to decision-makers and practitioners. FBA also grants funding to relevant research projects.

Moreover, FBA cooperates with the Economic Community of West African States (ECOWAS) in order to prevent electoral violence in West Africa, within the realm of Sweden’s development aid to sub-Saharan Africa.

During 2018, experts from FBA and ECOWAS carried out workshops in Mali, Guinea-Bissau and Nigeria, three West African states planning for elections at risk of violence.

– Conflicts in connection with elections is a common phenomenon in the region, and ECOWAS asked FBA for support in their preventative work. Together we trained important actors in those countries in dialogue and mediation as a tool for preventing violence. Among the participants were religious leaders and representatives from political parties, civil society organizations and state institutions such as referendum authorities, says Emma Skeppström, project manager for FBA’s work in sub-Saharan Africa.

– We discussed the specific risks that the participants were seeing in each country, and how to mitigate those risks. During 2019 we are planning for new workshops together with ECOWAS, for example in Togo, a country soon to go to the ballot box. West African elections must be peaceful. It is a priority for both FBA and ECOWAS, Emma says.

Another measure that can lower the risk of electoral violence is the deployment of election observers. FBA deploys Swedish personnel to international election observation missions led by the EU, the OSCE and The Carter Center.

– The short-term observers, who mainly report on the situation in the polling stations during election day, obviously play an important role. But the long-term observers, that are present long before election day in order to observe the election campaign, are just as important to prevent violence. They can raise the alarm if they notice threats and hate speech, says Stina Larserud, senior election specialist at FBA.

– Election observation missions contribute to a peaceful environment. But they also contribute to democratic development and legitimacy of elections.

Click here to read an interview with David Dahmén from Linköping in Sweden, on deployment from FBA to the EU election observation mission in Nigeria.