The OSCE draws attention to violence against women in Ukraine 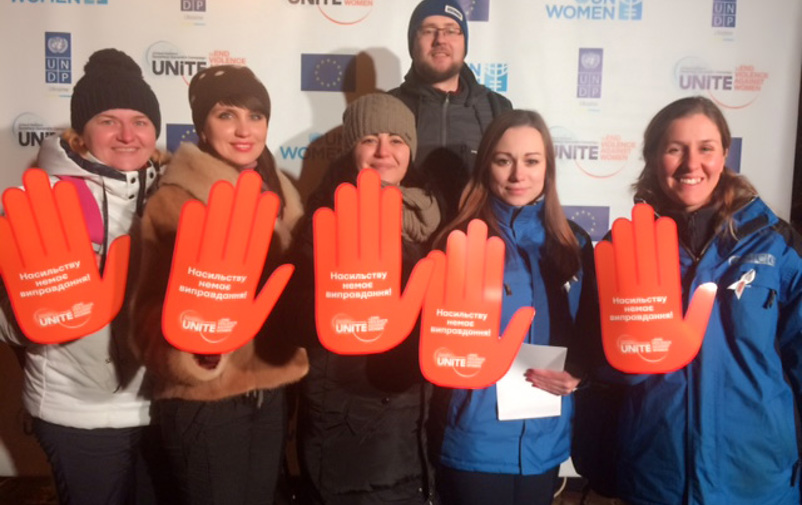 Dela
Violence towards women is widespread in Ukraine. Every year, gender-based violence is estimated to cause three times as many deaths as the armed conflict going on in the eastern part of the country since 2014. It is crucial for the OSCE to have a gender perspective in its operations.

It is a morning meeting at the OSCE office in Sievierodonetsk, some 720 kilometres southeast of the Ukrainian capital, Kyiv. A journey that takes around eight hours, first by train, then by car. Here in the eastern part of the country, a conflict between Ukrainian government forces and anti-government forces has been running for four years. There are daily violations of the cease-fire that the parties have agreed upon.

The international organization OSCE, comprising 57 participating states, is present with a special mission that monitors the situation and reports about the development; the OSCE Special Monitoring Mission to Ukraine (OSCE SMM). In the endeavours to reach peace and security the OSCE strives to strengthen women’s participation and leadership.

Annie Syrett, Monitoring Officer from Great Britain, holds the position of Gender Focal Point at the Sievierodonetsk office of the OSCE SMM. She sees to that all staff in the team integrate a gender perspective in their work.

– One in five women in Ukraine aged 15-49 have experienced violence according to data from the United Nations Development Program (UNDP). Gender-based violence is one of the most common human rights crimes – at the same time one of the least reported. Many crimes remain unrecorded since most women do not seek help, Annie Syrett says.

In the wake of conflict gender-based violence and human trafficking is extensive, mainly in the eastern parts of the country but also elsewhere. Annie Syrett notes that access to services for survivors of gender-based violence has been negatively impacted by the conflict. For example, a safe shelter in Luhansk province is now located in areas no longer controlled by the government and hence no longer accessible for the population in Sievierodonetsk.

The United Nations Population Fund (UNFPA) estimates in a report that over a million Ukrainian women are exposed to physical and sexual violence each year. It is taking its toll: at least 600 women in Ukraine die because of gender-based violence each year, compared to around 170 deaths per year because of the armed conflict. Despite the tremendous human suffering and economic loss, only one in ten seek help from the police and merely one per cent of the survivors seek medical and social help.

Sweden promotes several initiatives to increase gender equality in Ukraine through its Embassy in Kyiv. In the autumn of 2017 FBA held a gender mainstreaming training for the Ukrainian Ministry of Interior. The participants represented the police, the civil contingencies agency, the agency for border control and the migration agency.

Through FBA Sweden also contributes with civilian staff to the OSCE SMM. To draw attention to the widespread violence against women, the mission recently participated in the global 16 Days of Activism Campaign to End Gender-Based Violence. Annie Syrett provided her colleagues with information and a guide for conversations in Ukrainian, Russian and English, and every day during the campaign she gave an update about the OSCE activities going on.

The Monitoring Officers asked people if they are aware of what kind of services that are available for those who have been exposed to violence or human trafficking in their area, and the implications of the conflict on the possibility to get support.

The citizens of Sievierodonetsk were also invited to an OSCE Café focused on the topic “Women, Peace and Security”, which offered an informal space to discuss these issues. Besides the OSCE SMM, the UNFPA, the local patrol police and Luhansk’s Deputy Governor provided briefings during the event. In Luhansk province a new state-run hotline came into force during the campaign, for anyone in need of support from both government-controlled and non-government-controlled areas.

Human trafficking is rife in Ukraine. There are nearly two million internally displaced persons because of the war, and they are in a particularly vulnerable situation, concludes the US Department of State in a report published in summer 2017. Women and girls have been kidnapped in conflict affected areas to become prisoners of sexual exploitation, whereas boys and men are exposed to forced labour and forced into criminality.

Services provided in response to violence have so far been insufficient, but recent measures provide hope for change. Towards the end of 2017 the Ukrainian Parliament adopted a legislative act that criminalizes domestic violence. An additional law was passed aiming to prevent and combat violence committed by relatives. Specialized judges will be appointed, the police will receive training, shelters and specific health facilities will be established. In addition, the Ukrainian Cabinet recently appointed a Commissioner for Gender Equality.

Read more about the OSCE work for gender equality