The FBA course prepared Idil for her mission in Hebron 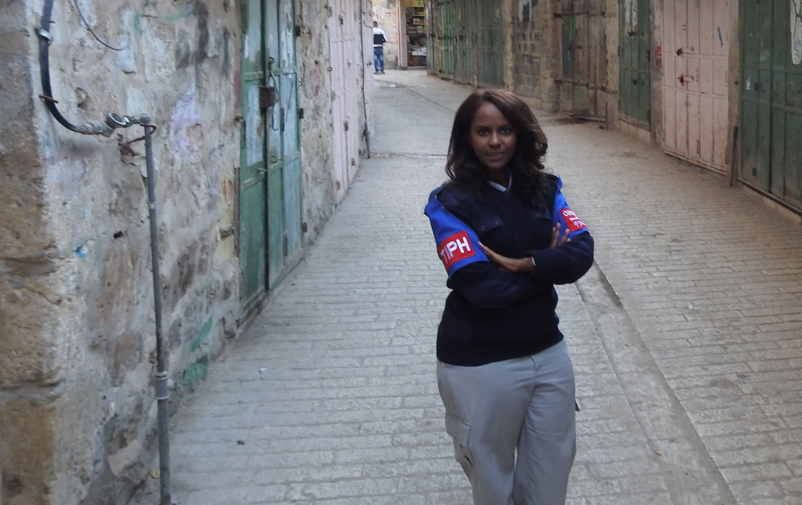 Dela
When personnel are sent to conflict areas, it is important that they are trained to identify, avoid and manage various risks that may arise. This is exactly what you learn if you take the FBA course on security in the field. “I really recommend the training for everyone about to go on an international mission”, says Idil Jamac who participated in the course ahead of her deployment to Palestine.

FBA deploys civilian experts to international peace operations which Sweden contributes personnel to. The operations are mostly led by the UN, EU and OSCE. But FBA also deploys personnel to TIPH, Temporary International Presence in Hebron, which is a free-standing civilian mission observing and reporting on the situation in the city of Hebron, located in the West Bank in Palestine. TIPH is upheld by five contributing countries, among them Sweden.

Idil travelled to Hebron from the Swedish capital Stockholm, where she originates from, in August 2017 to start work as an observer for TIPH. She is on secondment from the FBA with a one-year contract.
– My colleagues and I work in teams who patrol Hebron in order to observe and report on breaches of international human rights law and international humanitarian law, Idil says.

The patrolling teams work in shifts, seven days a week, because there is always a need for observers to be on duty. They monitor places such as checkpoints, where passersby are inspected by Israeli soldiers.
– We especially monitor checkpoints close to schools, to make sure that children on their way to school can pass by. We also regularly go on patrol in the parts of Hebron where Palestinians live close to Israeli settlers, where skirmishes often take place. We write daily reports about what we see and we share our conclusions with the Palestinian and Israeli authorities.

When Idil started to work for TIPH she took the FBA course “Protection against Risks and Threats in Conflict Areas”, held at Sandö in northern Sweden.
– The training has been very useful for me. I am much more aware of my surroundings after taking the course. I keep track of what is happening around me, especially if I am in a crowd. Avoiding dangerous situations is most important, but I have also learnt how to act if something serious would happen, Idil says.

The security situation in Hebron has worsened recently. When US President Donald Trump publicly recognized Jerusalem as the capital of Israel it led to violent demonstrations across the West Bank, not least in Hebron.
– It has been really tough. Some Palestinian demonstrators have thrown rocks at Israeli soldiers, and the soldiers have responded with tear gas, sound grenades and rubber bullets, Idil says.
– We, as observers, are always in the midst of the clashes. I have never experienced something like this before. Witnessing all this violence has been very challenging, and of course my colleagues and I have to think carefully about our security.

Not only did the FBA course on security in the field give Idil tools for risk management, the training also provided her with tools for dealing with stress and other emotions caused by her work.
– I really liked that about the training; that it dealt with psychosocial aspects as well. I see how important it is to take care of myself in order to cope.

When Idil recently monitored a demonstration she witnessed people fainting in the crowd.
– Some of the demonstrators collapsed because of the tear gas. All of a sudden I could make use of the medical skills I learnt during the FBA security training.

In 2018 the course “Protection against Risks and Threats in Conflict Areas” is offered in April, June and October. Here you can find upcoming courses.
– In my opinion, everyone who is about to go on an international mission should take the course. You can benefit from the training even if you are not being deployed to a high-risk area. What I learnt about fire safety, for example, is useful anywhere, Idil says.

She finds it important that TIPH continues patrolling Hebron despite the ongoing clashes, but with appropriate security measures of course.
– When people see us they calm down. Our presence can prevent and reduce violence.