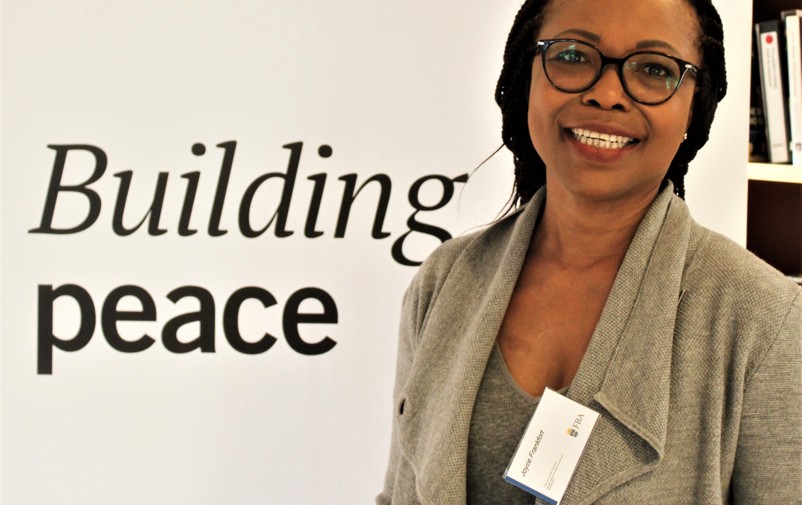 Dela
Security sector reform is a current issue in Liberia. The UN mission in the country will gradually be dismantled until it ends next year. Joyce Frankfort assists the Liberian government in the planning of UNMIL’s scale down. From FBA’s SSR course she brings with her new insights that will be of help to make the transition responsive to human security needs.

Joyce Frankfort is Programme Manager at the Justice and Security Programme in Liberia. She works for the Government of Liberia on strengthening rule of law within the justice and security sector. An important task before the elections that take place this autumn.

– I mainly work with the police, immigration, prosecution, drug enforcement and the judiciary, she says.

Joyce Frankfort also manages the implementation of the Government of Liberia Plan for UNMIL Transition in relation to justice and security as the UN peacekeeping mission UNMIL draws down.

– The closure of UNMIL has put pressure on us to ensure projects and activities are implemented in time to meet the benchmarks and ensure peace and security in Liberia. We have had peace in the presence of UNMIL but our goal is to sustain peace on our own. The upcoming elections and change of leadership present a possible risk of reemergence into conflict, as we have seen in other post-conflict countries. Therefore, we as Liberians, welcome the United Nations Security Council’s resolution to continue UNMIL’s presence, albeit small, until after the elections this autumn and also appreciate the reassurance of larger UN presence in the West African region.

The upcoming election is the third since the end of the civil war in 2003, and there are many challenges. Liberia is one of the world’s poorest countries, and still struggling with the consequences of the 14 year long war. Women’s participation in the election is considered important to reach a sustainable development.

– On a personal note, what makes me happy is when I drive around Monrovia and see someone building a house. I think to myself that this person or family feels safe enough to invest in the future to build a new home. I hope that we can maintain that sense of security for communities and nation to build, develop and grow stronger.

The dismantling of the UN mission was initiated in 2015. When the responsibility for security was transferred to the national armed forces and police, the need for security sector reform was accentuated. She says that the plan has been interesting to execute as it is conducted as a “whole of government” approach, including the enhancement and participation of local district and security councils, civil society and community organizations, the Liberian people and with the support from international partners.

Recently Joyce Frankfort took part in the FBA SSR course at Sandö together with a group of international participants, where the participants among other things discussed the importance of developing the security sector in conflict and post-conflict countries.

– It has been an amazing experience as I have had the opportunity to look at my work from a different perspective. My work entails program management, focusing mainly on implementation and problem-solving, strategic planning, coordination and advice, and liaison with development partners in resource mobilization. The concepts and perspectives we discussed in the training course will help me advice and assist the Government of Liberia through the transition of UNMIL drawdown in a way which is responsive to human security needs.

She emphasizes that the facilitators at FBA’s course helped the participants to look upon their work with security sector reform from new points of view, and that they together explored the concepts of a holistic perspective, that will be useful.

– It provided me with the theory and rational needed to place my work in a larger context. For example, I have done actor mapping before by assessing institutions functioning in accordance with their given legal mandate. Now, I have learned to identify other aspect such as potential overlaps of mandates and interests to see how institutions could function better and how to implement reform for change.