“We need to talk more about leadership in peace processes” 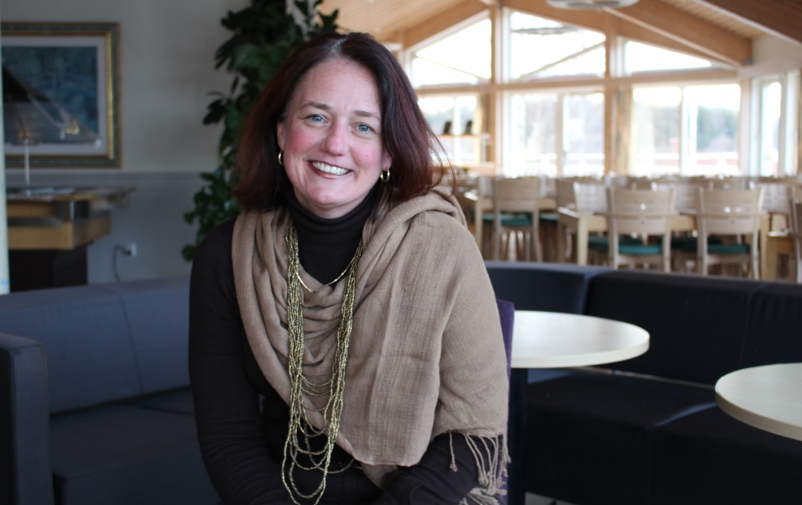 Dela
For more than 20 years, Emma Leslie has been working with conflict transformation and peace-building around the world. When a thousand women working for peace were nominated for the Nobel Peace Prize in 2005, Emma was one of them. She is also one of the trainers at the FBA’s dialogue and mediation course, and during a visit in Sweden, she talked about mediation, women’s role in peace processes and the everyday work of solving conflicts.

Conflict prevention and conflict resolution is one of the FBA’s areas of expertise. Among the work carried out by the agency within this field is the recurring course “Facilitation of dialogue processes and mediation efforts”. Emma Leslie has been of the resource persons at the course for the last four years. She has been involved in a number of peace processes, as in Myanmar (Burma) and the Philippines, and she is Executive Director for the Centre for Peace and Conflict Studies in Cambodia that she founded in 2008.

Emma, what are the most important qualities of a mediator?

– A mediator has to be someone who is ready to take leadership and initiative, ready to lead a process. Someone who is egoless in the sense that they are not looking for credit. And open to the input of other people, recognizing that they themselves are not enough to make this happen. Because conflicts are so complex, you need a complex infrastructure to address that. Our tendency is to always think that this one person will bring about everything, but that is such a naïve approach to addressing the complexity of a conflict.

Despite a number of UN resolutions and many efforts to advocate for more women around the negotiation tables, women are still underrepresented in mediation. Why do you think this is, and what has to be done concretely to change this?

– I am a bit concerned about how we use resolution 1325 to promote women mediators, because we have boiled it down to a place at the table. We continue to argue for seats, rather than influence. If we expect women to step up and serve in international peace processes, we need to equip and prepare them properly. By thinking that they will become that one person, we are setting them up to fail, because this is not a relevant model. I think that we need to talk more about leadership in peace processes. Leadership versus mediators that fly in and broker between two parties. That doesn’t work anymore in the complexity of conflicts like in Syria, Libya, the Philippines – or Myanmar where you have 18 armed groups and different agreements running and a military that is sceptical.

– In the Philippine process, I was the only woman in the international contact group. I made an agreement with my male colleagues, that when the moment comes in the negotiations for ‘the women’s issue’, I will not speak about this. I will speak on constitutional issues, on economic issues, power sharing arrangements, but I won’t speak on the women’s issue. That is already expected from me, and these are issues important to all of us.

One of the processes you have supported is the one in Myanmar. How did you work to support the process and what was your role?

– I have been working mostly ‘behind the scenes’. When the government in Myanmar started the process, they encouraged us to work more with the armed groups. One thing I feel strongly about is the fact that many times when the international community decides there will be a peace process, the other side is not prepared. I have worked with a number of armed groups and I have seen this a lot. They might not know ahead of time what the agenda is, how to respond to the different agenda items, or they are not given enough time to consult their constituencies. I have spent a lot of time talking about what the parties should wear to the talks, because they have never owned a suit. Or they have never been in a five star hotel, or in an airplane. Things that we take for granted. And all of that gets in the way of the talks. And then we wonder why things fail!

– In addition to that, every armed group I ever worked with, that is five or six now, have had internal conflicts on whether they should be negotiating for peace or not. So not only are they negotiating with the enemy, but also inside their group.

Which of your achievements in peace processes are you most proud over?

Emma, you were one of the thousand women working for peace that were nominated for the Nobel Peace Prize. Would you agree that your work contributes to a more peaceful world?

– Well, the importance of the thousand women peace prize was that it not only recognized women’s contribution to the field, but it showed that there is this force in the world, that every day works towards a more just peace. They chose a thousand women, that’s a lot of people. As one of those women, I felt affirmed that I am a part of this movement—and I am not alone. And this is a reminder, that none of us would get this peace prize on our own. Nobody should get a peace prize on their own!

– This is back to this notion of a one-man mediator. It is just this loony idea – we want champions or heroes. What is significant about the thousand women, and with working with this notion every day, is that we are part of something bigger. So therefore, yes, I believe I contributed to peace. As one in a great network of people, with an extended family of people like you in the FBA or our UN friends. We all work in our levels and contexts, doing something amazing. We all need each other.