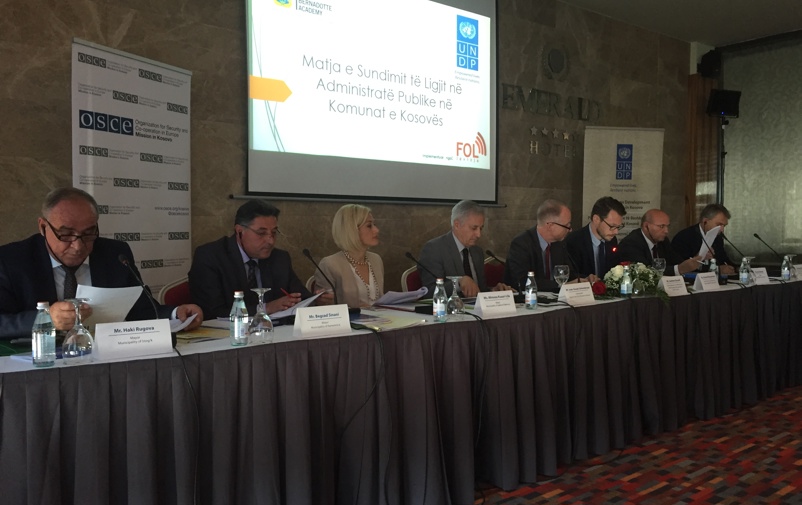 The findings of the project on rule of law in public administration in Kosovo were presented at a conference in Pristina. Richard Sannerholm (third person from the right in the picture), head of the FBA's rule of law programme, participated as one of the speakers.

Dela
Municipalities in Kosovo need to establish clear administrative procedures in order to uphold the rule of law. This was one of the findings of the project “Measuring Rule of Law in Public Administration in Kosovo Municipalities”, which has now held its final conference.

The conference concluded the one-year project between the FBA, the United Nations Development Programme (UNDP), the Organization for Security and Cooperation in Europe (OSCE) mission in Kosovo, and the local implementing partner FOL Movement.

The project followed a previous cooperation between the OSCE and FBA on trial monitoring of administrative proceedings in Kosovo. The trial monitoring, which was based on the FBA and OSCE Handbook for Monitoring Administrative Justice, revealed deficits within the public administration and a need to further assess the respect for rule of law at the agency level.

Based on an open application process, the municipalities of Lipjan/Lipljan, Gjakovë/Djakovica, Istog/k, and Kamenicë/a were selected to assess and analyse the application of rule of law standards in their delivery of social housing services. The assessments were conducted by the local non-governmental organization FOL Movement together with the municipalities based on the methodology developed by the FBA and UNDP in the Users’ Guide for Measuring Rule of Law in Public Administration. The Users’ Guide builds on commonly accepted rule of law principles and categorizes the findings into legal awareness, institutional capacity, access, accountability and trust related problems.

The results from the project, including a series of recommendations, were presented at the final conference on 24 May in Pristina. The findings include an identified need to establish clear administrative procedures in particular regarding appeals, communication and the adherence to deadlines in the municipalities. Other areas for consideration include the lack of a registry of municipal owned properties and the overlapping of competencies both within the municipalities and between the municipal and central levels.

The findings also reveal some strong points such as the ability of the municipalities to communicate and address requests in different languages, which is particularly important in Kosovo.

– This has been a very rewarding project thanks to the dedication from the municipalities and cooperation from all actors. The project has revealed interesting findings underlining the centrality of the rule of law for restoring social cohesion in post-conflict societies, says Dominique Górska.

Participants at the final conference included representatives from ministries, embassies, EULEX (the EU rule of law mission in Kosovo), heads from UNDP and OSCE, mayors from the municipalities, and representatives from civil society organizations and the FBA. In his opening remarks, the UN Development Coordinator and UNDP Resident Representative, Andrew Russell, expressed the importance of establishing an effective and functioning public administration at all levels in Kosovo. Jean-Claude Schlumberger, Head of the OSCE Mission in Kosovo, described the project as being very innovative and emphasized that respect for rule of law at the local level is important for any democracy.

To learn more about the project please click here. The final report can be accessed here.