Dela
Effective peace-building requires good leadership. FBA works with leadership in various ways, including a new effort to support the Senior Women Talent Pipeline, where we train women from all over the globe who see themselves as future leaders within UN peace operations.

Leadership in peace-building is one of the FBA’s areas of expertise. The agency deploys Swedish personnel to serve as leaders in international peace operations, and arranges leadership courses and trainings.
– For example the FBA arranged leadership training in the autumn of 2017, for the chiefs of staff from all international UN peace operations while they were gathered in New York. During the large civil-military exercise Viking, to be arranged by the FBA and the Swedish Armed Forces in April 2018, leadership will also be in focus, says Kristina Zetterlund, project manager for the FBA’s activities in the area of leadership.

– FBA was also commissioned by the Swedish Ministry of Foreign Affairs to form a network of Swedish women peace mediators, who obviously are leaders within their field of work. And within the agency’s work with a number of the Swedish development aid strategies for various conflict-affected countries, we support key individuals who may be future leaders for peace in their respective countries. FBA has prioritized leadership from the start.

New to the FBA is the agency’s support for the UN Senior Women Talent Pipeline. The UN wants to achieve gender parity within the organization by 2026, and in order to reach the goal more women in senior positions are needed. To attract more qualified women, the UN started the Senior Women Talent Pipeline in 2013. A global call was made for women with relevant work experience and university degrees in for example law, political science or communications, who aspired to civilian leadership roles in UN peace operations.

The call yielded applicants from all over the world and some 150 women were selected to be part of the programme. The women have been offered training, mentorship support, regular updates about new job opportunities within the UN, and job application support.
– Today a number of those women occupy senior level positions within the UN. There are so many qualified women out there, we just need to strengthen their confidence so that they dare to apply for these positions, says Kristina Koch, chief of the recruitment section at the UN Department of Field Support.

In June 2017, a new global call was made for the Senior Women Talent Pipeline. Some 100 women were selected to be part of the programme this time.
– We need to continue this important work. As of today, 28 percent of the international staff in UN peace operations are women. It should be 50 percent, Kristina Koch says.

In February 2018, about 30 of the women in the Senior Women Talent Pipeline came to Sweden to participate in a week-long training, held by the FBA at the Swedish Armed Forces International Centre outside of Stockholm. FBA arranged the training upon request, and in cooperation with, the UN.
– UN peace operations are very complex. One operation can include thousands of people, from different national cultures as well as professional cultures – civilian, military, police. Moreover, they are deployed in unstable settings and the threat level can be heightened. Being the leader of such an operation is a challenge, Kristina Zetterlund says.

The participants in the Senior Women Talent Pipeline all have extensive experience and expertise. In order to be even better prepared for future leadership positions within UN peace operations, they were trained by the FBA in for example the UN code of conduct, protection of civilians, mediation techniques, strategic leadership and strategic communication.
– Good leadership can be many different things depending on the context. The UN focuses a lot on leadership right now, they see that there is room for continued improvement. The FBA are proud to be able to contribute, Kristina Zetterlund says.

The support given by the FBA to the Senior Women Talent Pipeline is part of the agency’s work with the Swedish strategy for sustainable peace.
– We are happy to collaborate with the FBA. The agency has a very good experience in leadership training, Kristina Koch says.

She highlights that the UN wants to enable staff to combine work in peace operations – often undertaken in risky environments – with family life.
– The UN needs to attract new talent, especially women willing to work in the field. The Senior Women Talent Pipeline is part of all this. We must explain that it is possible to work in a peace operation, at senior level, and have a family. The UN offers many benefits for parents. And you have the opportunity to do something that makes your children proud – you will be part of making the world a safer place, Kristina Koch says. 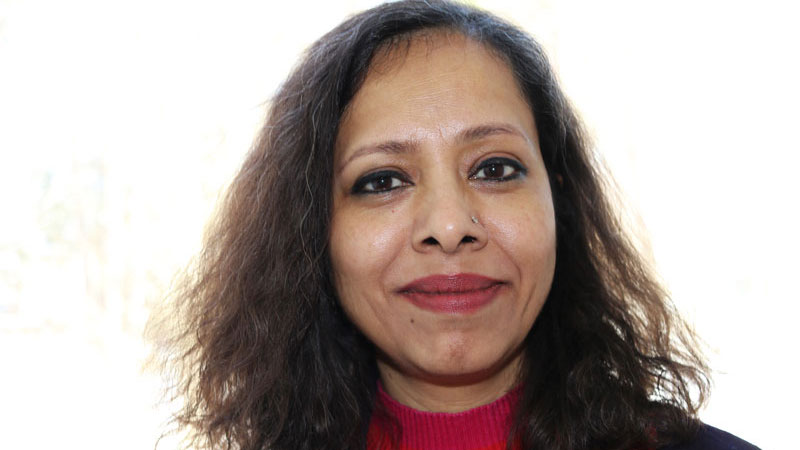 Why did you apply for the Senior Women Talent Pipeline?
– I worked for the Ministry of Defense in India for several years, one of the things I managed was India’s troop contributions to UN peace operations. I also have a background within international development. I was part of the team that set up the aid organization Oxfam in India, and today I am the CEO of an association of various microfinance institutions. I think I have the right experience to be able to do a good job as the head of mission support or political affairs in a UN peace operation. On a personal level, nothing is holding me back. I divorced nine years ago and my daughter is now grown up. I am ready for a challenge and I believe this programme can help me start a career in the UN system.

What did you think about the FBA training offered for the Senior Women Talent Pipeline?
– The course has been an eye-opener. I have been able to discuss with the course mentors, people with great experience from the UN. Personal meetings are important. If you come from outside the UN, you tend to see the organization through rose-tinted glasses. You need to hear about the reality to get prepared.

What is good leadership in a peace operation, according to you?
– It is imperative to listen to your co-workers and the people in the country that you are in. Then you have to be able to take the initiative and take decisions. You must be ethical and take difficult conversations if needed. And you must take full responsibility.

Why did you apply for the Senior Women Talent Pipeline?
– I applied because I want to work for the UN in the future. I am so happy to be selected! I have worked with peace-building for the African Union for a long time, I was stationed in the Central African Republic before and now I am in Madagascar. Working with peace operations for the UN would be a dream. In my work for the African Union I have to collaborate closely with the UN.

What did you think about the FBA training offered for the Senior Women Talent Pipeline?
– The course has given me insight into the organization of the UN, and into the civilian, military and police components of UN peace operations. It has been very interesting.

Why are more female leaders in peace operations needed, according to you?
– I think that it is great that the UN Secretary-General António Guterres has stated that he wants gender parity in the organization. Without women, the UN cannot achieve lasting peace. Women make up half of the world population. As a whole, I think the people of the world should be better represented within the UN. It is not only about gender. We need to see more African leaders in the UN as well. I see that the UN is moving forward, and I think that reforms are needed so that the organization can solve the conflicts of today and respond to existing needs.