The gender adviser is a key player for organizational development 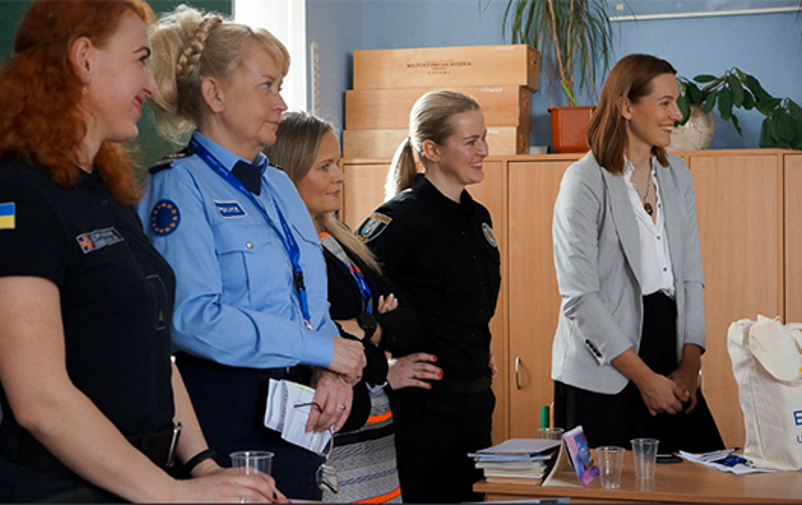 Dela
Gender mainstreaming is about establishing work procedures that promote gender equality in the daily work. In order to succeed, gender mainstreaming has to be incorporated in the organizational structure and embraced by the staff. The gender adviser has a significant role in supporting this development.

– It is my job to support the mission in finding ways to be able to work more gender equally, so I try to contribute to an organizational culture that promotes gender equality, says Agata Szymanska, seconded from FBA to EU’s advisory mission in Ukraine, EUAM.

The mission started in 2014 following the Maidan revolution and assists Ukrainian authorities with reforming the civilian part of the security sector – the Ministry of Interior and law enforcement agencies – in accordance with international principles for good governance and human rights. The goal is to build an efficient and accountable security sector trusted by the public.

This also involves strengthening women’s rights through improved conditions for authorities to apply a gender perspective in their work. Domestic violence is widespread in Ukraine and there are strong notions about the role of women in the family and society. At the same time, the security sector has few women in leading positions and tools for how to treat victims of crime are scarce, including instructions for how to deal with abuses such as sexual harassment and discrimination.

When Agata took on the assignment as gender adviser at the EUAM headquarters in Kiev in summer 2018, she mainly worked operationally with Ukrainian authorities. One year later, the EU issued new directives and Agata became part of the Chief of Staff’s office, and today she serves the entire mission as an adviser.

– It has created new opportunities and made clear that I am here to support the organization. The gender adviser’s role is basically to support organizational change, she states. To institutionalize gender mainstreaming is a necessity in an organization where the staff constantly rotates. There is also a need for a clear leadership in order for the staff to understand what is expected of them.

– Some of my colleagues have long experience from working in peace operations in conflict or post-conflict settings, whereas others are on their very first mission. The understanding of what gender mainstreaming is varies greatly among the staff, Agata explains.

Among the more than 300 mission staff – who come from 28 countries and have different professional backgrounds like border management, the prosecution authority and the police – there is a varied knowledge of gender equality and why it is a corner stone in the work for peace and security.

To create an organizational culture where gender mainstreaming is common practice requires understanding of the importance and benefits of gender equality.

– Many think that it is an ideological action, but rather it is about having a rights perspective, Agata emphasizes.

Agata aims at providing her colleagues with tools that empower them in their work, and help them carry out basic gender equality analyses and bring a gender perspective when they meet partners.

– There is no point in judging someone who does not have knowledge in this field. Instead, I try to encourage and show how to solve the challenges that our co-workers face, Agata says.

She needs to monitor and keep herself updated with the situation in Ukraine to be able to support her colleagues based at EUAM’s field offices in Kharkiv, Lviv, Mariupol and Odessa, and she uses statistics and facts to illustrate the added value gender equality provides.

Co-workers in various parts of the organization form a network with Gender Focal Points for the gender equality work.

Agata stresses that the network is of strategic importance for the implementation of EU’s policy framework to promote gender equality.

– All activities in the mission should be carried out with a gender equality perspective – the purchase of equipment for our partners as well as decisions on who we cooperate with.

In addition, EU has initiated a concept called “Gender Responsive Leadership” in the union’s missions. This means that gender equality has a place on the agenda when the Head of Missions report to Brussels on their results.

Agata perceives a change of attitude. Sixty colleagues signed up for the latest in-house training that she arranged online. The mission management took a training the past winter, and this autumn she will carry out a training for middle managers in cooperation with FBA.

– The Gender Responsive Leadership training organised by Agata, as well as her continuous advice, input and support to management and colleagues, and her professional and pragmatic approach, ensures that EUAM remains committed to and maintains a progressive approach towards gender mainstreaming.