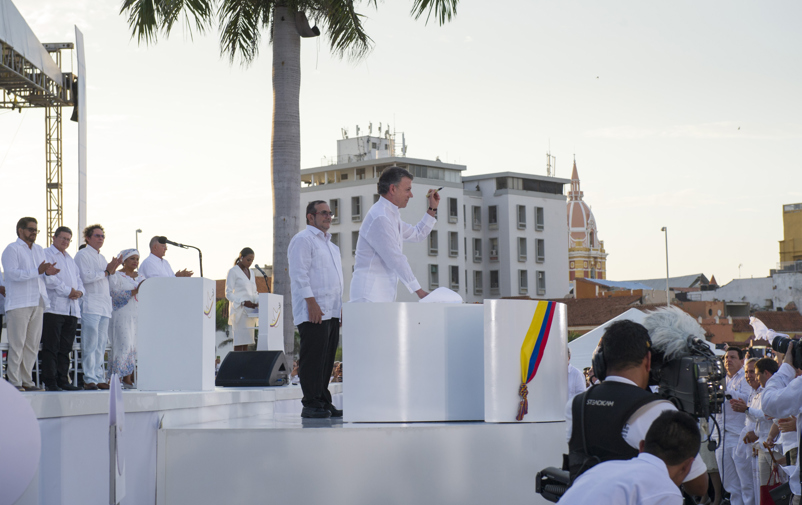 Dela
Following a lengthy and complicated process, a peace agreement is finally in place in Colombia. The FARC soldiers are now to disarm and to transition into civilian life. “FBA will be an important partner in the work ahead of us”, says Joshua Mitrotti, Director-General of the Colombian state agency for reintegration of former combatants.

The Colombian peace process has taken many turns. In August 2016 news broke that the Colombian government and the left-wing guerrilla FARC had reached a peace agreement, after four years of negotiations. But in the referendum held in October the people of Colombia rejected the agreement.

Colombia’s president Juan Manuel Santos then arranged meetings with representatives from the “No” side in the referendum in order to listen to their concerns. On November 12 a revised agreement between the government and FARC was announced. The new peace deal was accepted by the Parliament and is now to be implemented – at last.

FBA has supported the peace process in Colombia throughout the years. In 2016 FBA was also commissioned to continue to contribute to peace and security in the country, within the realm of Sweden’s new development cooperation strategy for Colombia 2016–2020. The fact that a peace agreement finally is in place in Colombia will greatly facilitate the work, says Magnus Jacobson Silverryd at the FBA.
– We have all been torn between hope and despair this autumn. Now we can look ahead and continue building upon the good relations we have established with central actors in the Colombian peace process.

Magnus is part of the FBA’s programme for disarmament, demobilization and reintegration of former combatants (DDR). According to Sweden’s new development aid strategy for Colombia, this is one of the areas the FBA will work with in the country for the years to come, along with security sector reform (SSR) and issues regarding women, peace and security.

During the past decade the FBA has already conducted DDR and SSR training for a number of key persons within the police, military and civilian state agencies of Colombia. Within the realm of the new development aid strategy the FBA will conduct more training for people in strategic positions; training on DDR and SSR as well as on issues regarding women, peace and security.

– We are very grateful for the FBA’s support throughout the years. The FBA’s expertise and advice have been crucial for us. We look forward to continue our cooperation, and also to be able to give back by sharing our experiences, says Joshua Mitrotti from the Colombian state agency for reintegration of former combatants (ACR) with which the FBA has collaborated since 2008.

According to the new peace agreement, the FARC soldiers will have handed in all their weapons by the end of May 2017. The collection of weapons will take place at 27 disarmament sites around the country, run by the newly established UN mission to Colombia. The weapons are to be melted down and used to make peace monuments. One monument will be placed in New York, one in Havana and one in Bogotá. But what will happen next to the disarmed former FARC combatants remains somewhat unclear.

The FBA is currently looking at various ways to support ACR during 2017. The support will concern issues regarding the implementation of the peace agreement, such as helping the former combatants to find civilian employment, start an educational programme, or reunite with missing family members.
– We have to succeed in this work. Or there is a risk that these people will join other armed groups, says Joshua Mitrotti.

There are approximately 6000 FARC soldiers that have to be reintegrated into society. Many of them have no experience of civilian life as adults. FARC was established already in the 1960s, a decade when Colombia saw the birth of numerous communist guerrillas fighting to protest the wide socio-economic gaps in the country. This was the start of a bloody civil war between the guerrillas, government forces, and paramilitary groups – causing six million refugees and the death of at least 260 000 people.

However, some of the smaller guerrillas reached peace deals with the government during the 1990s, and the most important paramilitary group AUC was disarmed and demobilized during the 2000s. FARC, on the other hand, grew larger and the conflict between FARC and the government of Colombia intensified. Now, when a peace agreement with FARC is in place, a conflict spanning over 52 years is coming to an end. But the ELN guerrilla still remains. Peace talks between the government and ELN are soon to begin.

Joshua Mitrotti’s concern is that former FARC fighters will join the ELN when FARC is being disarmed, or join some of the criminal gangs that plague Colombia. Even though homicide rates have decreased drastically the last ten years, violence, drug trafficking and other forms of criminality continue to cause unrest in the country.
– 2017 will be an important year for us. If we succeed, the peace process in Colombia will become an international benchmark.

Lorena Carrillo from the think-tank CINEP is also hoping for Colombia to become a global role-model. Meanwhile, she stresses that several issues remain unsolved. For example, there are still large divides between the urban and rural areas of Colombia. And in the rural areas that have been controlled by FARC, a security vacuum may arise when FARC are demobilized.
– Violence against women is also a widespread problem that we have to work on.

Despite the remaining challenges – Colombia’s president Juan Manuel Santos is now being awarded the Nobel Peace Prize for his efforts to reach a peace agreement. Orlando Romero Reyes, government representative in the tripartite mechanism to monitor the peace process, has a positive outlook. The tripartite mechanism is an institution comprised of delegates from FARC, the Colombian government and the UN mission to the country, and according to Orlando cooperation works well.
– We have come to understand each other. And that is fundamental to build peace.

Photo: President Santos at the signing of the peace agreement. UN Photo/Rick Bajornas