Shortly after the election observers arrive at the political rally the atmosphere gets hostile. The general security situation in Criseland imposes them to wear their personal safety equipment at all time.

Making sure the car is functioning properly and safe driving are central in the course. The traffic environment is the greatest threat in many mission areas. 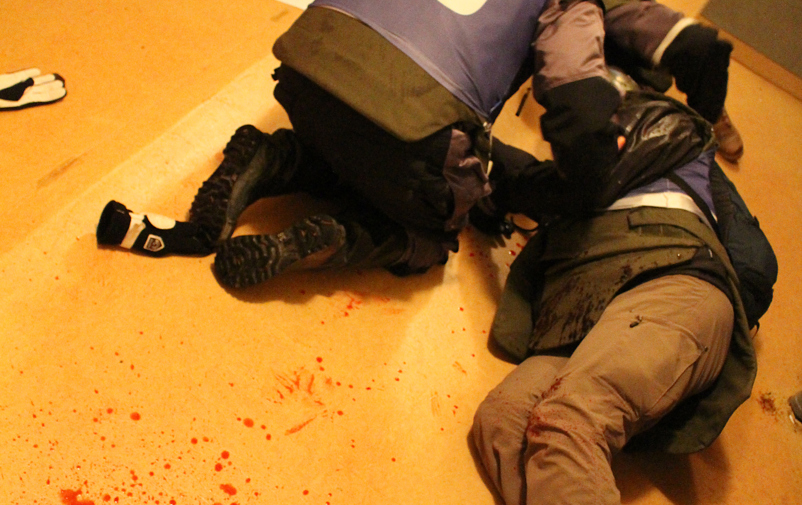 When the firing starts and one of the observers get hurt the group has to solve the situation under great stress.

The facilites at Sandö provide good conditions for realistic training. In this scenario the group is first on site at a traffic accident.

Dela
“He’s shot!” The floor suddenly turns red in the voting station and the five election observers from Sweden take cover as they try to help their colleague, Mikael, who’s been hit by a bullet in his upper arm. Outside the house are two cars with their engines running and the drivers calling for the team to get out of there. Suddenly the small arms fire goes off again, closer this time, and the observers remain on the floor and attempt to stop the bleeding.

Fortunately this is just an exercise and the fire arms are fake (provided by members of the Swedish Home Guard). The voting station is an old locker room at Sandö in the north western part of Sweden and the blood is artificial and doesn’t originate from Mikael’s arm but from a bottle. This element is part of the week-long course “Protection against Risks and Threats in Conflict areas”, undertaken by 20 people. The purpose of the course is to enhance the participants’ safety and security awareness when working in mission areas and to teach practical and concrete do’s and don’ts for situations that the participants can experience in those areas.

“What could you have done differently?” asks one of the instructors when the exercise is over.

“We could have left the place quicker during the shooting”, says Ann-Sofie.

“You were in there far too long. If this would have been a real life incident your drivers would most likely have left long before you finally got out of the house. Sometimes speed and distance can be your best cover and protection”, says Julian Harris, project leader for the FBA courses on security in the field.

It’s no coincidence that this exercise takes place in a voting station in the fictitious country Criseland. With a few exceptions, the course participants are election observers. They work for longer or shorter periods, ranging from a couple of days to several months, on site to observe and monitor elections in different places all over the world, to make sure the process isn’t manipulated and to report possible election fraud. The missions are led by the EU and the OSCE.

During 2015 the FBA is responsible for the Swedish election observers’ pre-deployment training. From 1st of January 2016 both the recruitment, training and the responsibility for secondment of the observers will most likely be transferred to the FBA from SIDA.

Many election observation missions take place in countries with on-going conflicts or where conflicts have recently ended and may therefore provide a challenging security situation. The participants drill different skills during the course; radio communications, convoy driving, media relations, first aid and fire safety among others. With support from The Swedish Civil Contingencies Agency the effect of explosives and small arms fire are demonstrated. The participants are also taught how to act and behave in areas with explosive remnants of war (ERW).

One part of the course that tends to increase the participants’ heart rate is the capture and hostage exercise. Jonas Månsson, deputy head of the Swedish Armed Forces SERE School, is responsible for the exercise.

“The purpose is to train the participants in a practical manner and let them experience how they react to great physical and psychological stress”, Jonas says.

The exercise is built on experiences from real life events and several persons that have undergone this and similar courses and thereafter been captured have testified that the techniques they learned were crucial for their ability to handle the situation.

One of the week’s last exercises for the weary participants is to observe a political rally. When the group arrives at the place for the rally, chaos breaks out and the election observers quickly understand that their security is threatened and they must interact with the role players, who are students from the local high school, Räddningsgymnasiet and Umeå University, in order to de-escalate the situation.

After the exercise two of the group members, Elin and Ewy, state that the situation got out of hand.

“It’s a realistic exercise for us election observers. This is something that could occur in a mission. But of course, when it’s training, it gets a bit ‘edgy’”, Elin says.

As soon as the exercise is over, the group gathers to evaluate their performance. The question of personal safety is brought up and when and how you should request back up from the mission headquarters.

Julian Harris, course manager, has together with the other instructors on the course, underlined it many times throughout the week:

“The most important thing is for you to get in the right mind set for safety and security. In the end the security is always your own responsibility”.